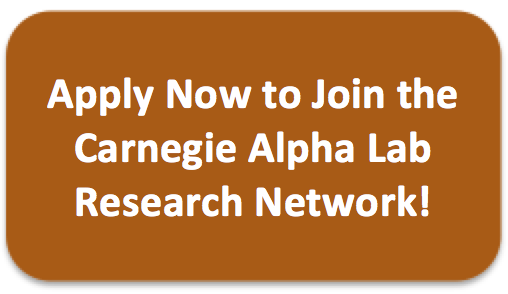 The Carnegie Alpha Lab Research Network is not just a source of research subjects. Instead, researchers are expected to become active members of the NIC, taking on responsibility for working on problems of interest to – and critical to the success of – the NIC; working collaboratively with others in the NIC, including community colleges and their faculty; and sharing the results of their work with other Network researchers and the NIC as a whole, including practitioners and program design/developers. It is expected that researchers will have a sincere interest in helping to improve the success of community college developmental mathematics students.

Researchers are encouraged to publish and make freely available any and all findings generated by their work in the Network.  At a minimum, the NIC must be granted a non-exclusive right to use all materials and findings produced from work within the Network, royalty free.  Beyond this, Carnegie strongly requests that all IP be licensed and made available under a Creative Commons Attribution-NonCommercial-ShareAlike license. That is, others (even those outside the NIC) may remix, tweak, and build upon work conducted within the Network, non-commercially, as long as they credit the copyright holder and license their new creations under the identical terms.

Researchers should not use the Network as a context for creating proprietary knowledge, products, or services.

Membership in the Carnegie Alpha Lab Research Network is free while researchers are conducting small-scale pilot studies. Researchers who successfully secure funding for their work are asked to include a Carnegie Alpha Lab Research Network fee in their grant budgets. This fee is intended to help cover costs incurred by Carnegie in the course research collaborations.The Network fee will depend on scale, project requirements, and source of funding. A minimum fee of $10,000 per year, per project is suggested. For projects with funding that exceeds $200,000 annually, a fee equal to 5% of direct costs is suggested, up to a maximum of $25,000 per year. For projects on which Hub analysts are to do significant work, Carnegie will expect Hub staff to be costed out separately in grant budgets. Adjustments will be made to match restrictions placed by funding sources.

Members are reviewed annually. Members judged to be in violation of these terms of participation, whose work does not appear to be aligned with the NIC’s research priorities, or who have not been able to sustain collaboration with a college site or faculty member, may have their membership terminated.